Comparison of Welded vs. Riveted vs. Toggle Lock assembly methods on idler pulleys.

There are many different manufacturing methods when producing steel idler pulleys. This test was used to compare some of the more common methods to better understand strengths and weaknesses of each.

Similar sized idler pulleys, each using a different mechanical fastening method, were destruct tested by driving a wedge between the two idler halves to a predetermined depth. The force required to separate the stamped halves was measured as well as visual inspection of the test articles to determine strength of the metal joining method used. 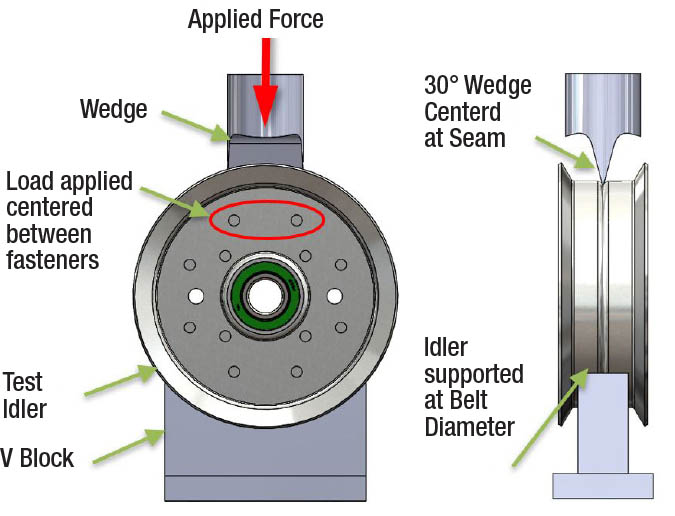 article was assembled using 12 projection welds located on two pitch circles. The load was applied at a point between two outer welds on the outer pitch circle. The welds withstood a downward force of 2,620 lbf without failure of the weld or mating material.

article was assembled using 8 solid rivets located on a single pitch circle. The load was applied at a point between two rivets. The assembly withstood a downward force of 2,482 lbf without failure of the rivet. It was observed that there was buckling of the idler halves at the location of the rivet head.

article was assembled using a combination of 4 solid rivets located on an outer pitch circle and 3 inner toggle locks. The load was applied at a point between two rivets and directly above a toggle lock. The assembly withstood a downward force of 1,503 lbf. It was observed that the solid rivet heads had bent at the point of load and the rivet shanks had elongated. There was also localized deformation of the idler halves at the location of the rivets and the toggle lock showed signs of separation.

Contact us today with your design, manufacturing or sourcing challenges.

Would you like to review your ideas with an NHI engineer?